DMT, also known as spirit molecule, is a hallucinogenic tryptamine drug. It occurs naturally in many plants and animals. DMT (N,N-Dimethyltryptamine) is a Schedule 1 controlled substance and thus is illegal to buy, manufacture, possess or distribute DMT Pipe. It produces an intense hallucinogenic experience.

DMT has no approved medical use but is used in religious ceremonies to gain spiritual experiences. Its use is widespread in shamanic rituals in South America.

DMT (N,N-Dimethyltryptamine) is a white crystalline powder that is derived from plants named Psychotria Viridis and Banisteriopsis Caapi found in South America, Mexico and parts of Asia.

DMT Pipes are used to ingesting DMT via inhalation.

A freebase pipe or an oil burner are also referred to as a meth pipe. The DMT crystals are placed in the bulb, then using a heat source, the glass is heated up to vaporize the DMT via conduction. The resultant vapours are then inhaled and held in the lungs for a duration of 10-20 seconds to allow for maximum absorption.

Glass vapour genie is the most efficient and easy way to ingest DMT. They use the convection method to vaporize the DMT by passing a heated air stream over the crystals. It is a glass weed pipe with a bowl. To use the glass pipe is filled through the opening above the bowl. However, it is very expensive but is very easy to use and efficient.

It is made by taking a small glass bottle. A copper scrubber is put in the neck, and the hole is made in the bottom. Before pouring the DMT onto it, the copper mesh is heated. After putting DMT on the copper, a lighter is used to heat the scrubber to vaporize it. Straw is set in the hole to make it easier to breathe from.

Dab rigs are also used to vaporize DMT; ensure the dose you are taking is adequate.

DMT is a powerful psychedelic drug and is a naturally occurring substance in plants. It is illegal to buy, manufacture, sell, possess or distribute, but it is sold online.

A DMT vape pen is used to inhale DMT by vaporizing it. They come in various designs and deliver enough vapour to give a satisfying experience. The DMT vape pens can be bought online or offline. 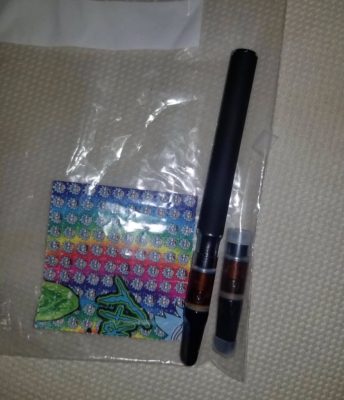 DMT breakthrough refers to a specific state when the individual feels that they have entered a different reality or dimension. On inhaling DMT, some changes occur in the individual’s brain activity that helps to create alternate dimensions and new realities that exist only in the brain, and people have strong emotional reactions. DMT breakthrough induces a psychological experience.

DMT can be consumed in the following ways:

DMT Juul pods provide you with a smart and satisfying vapour experience. Juul pods make it easy to customize your experience. It saves you from messy refills. You just put the Juul pod into the top of the device and puff.

Answering The Question: WHAT IS AYAHUASCA ?