It is a South American psychoactive brew made from the Psychotria Viridis plant’s leaves and the stalks of the Banisteriopsis Caapi vine. Ayahuasca brew is used as spiritual and religious medicine in ceremonies by ancient Amazonian tribes. Ayahuasca is also known as la purga, the tea, ayaguasca, quecha ayawaska, yage, punga huasca, DMT, caapi, chacruna and daime.

It is a decoction made by blending two plants, Banisteriopsis caapi vine (containing beta-carboline alkaloids) and Psychotria Viridis (rich in hallucinogen N,N-dimethyltryptamine, DMT). It is a plant-based psychedelic that affects a human being’s senses; it alters a person’s thinking, emotions, and sense of time. Psychoactive substances found in ayahuasca affects the brain and central nervous system, and its effects include:

Though traditionally, its uses were limited to spiritual and religious ceremonies under the guidance of experienced shaman but more recently, people have started using it for recreational purposes. 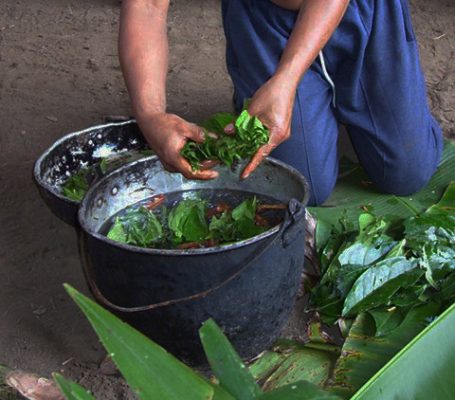 DMT, the psychoactive substance in ayahuasca, is a Schedule 1 controlled substance as per the 1971 UN Convention on Psychotropic Substances. Except for limited medical and scientific purposes, manufacturing, selling and using DMT is prohibited.

As per International Narcotics Control Board, preparations made from plants containing DMT are not subject to international control; thus, ayahuasca brew in itself is not under international control. Hence, its legality is governed by the laws of each country. Ayahuasca is legal in Latin American countries naming Peru, Bolivia, Brazil, Colombia and Ecuador.

What is Ayahuasca & How to Make Ayahuasca?

The first step involves cleaning the vine segments; this can be done by either washing the vine or scraping the bark with a knife. Once the vine is meticulously cleaned, it is pounded with a wooden hammer or mallet. This results in breaking down the vine into thinner strands or fibre, thus increasing surface area for better extraction of medical essence.

Once the vine is mashed into fibre or strands, it is placed in the pot for prolonged boiling or heating with Chacruna leaves and water. It is boiled till the water reduces to half. Then the water is removed, and more water is added to plant material, and the process of boiling is repeated, and this is done several times.

The brew waters are added together and brewed until it reduces significantly. In the final stage, the brew is cooled and then filtered to eliminate any plant material or impurities.

What is Ayahuasca Diet?

The ayahuasca diet should be light, healthy and preferably vegetarian or vegan. One can consume grains, legumes, fresh fruits, vegetables, eggs, organic free-range chicken or light fish, nuts and seeds, and the ideal seasonings are fresh herbs and mild spices. You should refrain from caffeine, alcohol, salt, oil, yeast, sugar, fermented foods, pickled foods, pork or red meat, dairy, peppers and a few vegetables and fruits. The time of dietary restrictions can vary; it may be 4 days or 14 days before and after the ceremony, depending on the shaman or healing centre.